on August 10, 2017
Yikes!  It has been some time since my last blog post, which means I've been a busy little quilting bee!  Yes--I will blame my blogging silence on this beautiful bundle of black and blues:  Cherrywood's Van Gogh Challenge fabrics.
This year's challenge called for us to "use Vincent van Gogh's paintings as inspiration to push yourself creatively, think outside the box and create new fiber art."  Challenge rules included a 20" x 20" square finish and to use the challenge bundle of blues and black in 60-70% of the quilt top with the option of using additional accent colors from Cherrywoods hand dyed collection (white is the exception as they don't carry white).

As my usual, I did not actually start working on this challenge until the week before the deadline (Technically Thursday before the Tuesday deadline--but who is counting days, hours and minutes until the deadline?!?)  My mantra for this particular challenge was "If Plan A doesn't work, the alphabet has 25 more letters.  Stay Cool!"  And as several facebook friends reminded me...there is always the greek alphabet and chinese alphabet that has even more back up options!!

Plans A through E included idea of making a modern mandala, modern mola featuring peacocks, abstract irises, Blues Clues and even the Cookie Monster!  In fairness, I may have been hungry during that last moment of inspiration!  Luckily, several of these plans never made it past the brainstorming phase.  I did try a few different paper mock ups to play around with coloring of a modern iris design but I was having a hard time achieving the 60-70% use of challenge fabrics while also achieving an interesting quilt design...so my paper mock ups were scrapped and destined for the recycle bin.
Like so many van Gogh fans, I love Starry Night.  I thought about incorporating some Starry Design inspiration into a backdrop for a Modern Mandala but struggled with the background idea and again that 60-70% rule.  This particular plan did involve me cutting up some fabric before scrapping the idea.  Luckily, those fused strips will make a lovely addition to my bin of fused scraps and I only lost a little of the challenge fabrics.
Back to the drawing board.  As I studied Starry Night's backdrop, I envisioned swirling water that ebbs and flows.  Immediately I remembered Karen Eckmeier's Layered Waves technique that I learned while taking a workshop with her at PIQF.  "Yes--this would certainly capture those bold brushstrokes nicely" is what I told myself over and over as I grabbed my rotary cutter and cut a large waving curve right through the center of one of the challenge blues!!  Any fears were soon quelled once I finished my first wavy strata set!  Literally and figuratively, this design was finally flowing as I constructed more and more strata that just ebbed and flowed under the sewing machine!!  I added a lighter and darker value of blue to the challenge blues and just kept assembling units until I was down to scraps that were too small to use.
Laying out all these layerered waves was a bit tricky as they each unit had a mind of its own.  The goal is to conceal any raw edges by tucking them under the other layered waves.  However any shifting of one strata set, even minor, would inevitably lead to a domino effect of shifting all the other waves.  But after some careful maneuvering, I had achieved a composition that truly ebbed and flowed like van Gogh's brushstrokes!  I used Elmer's School glue to carefully glue baste the overlapping areas to create a weblike unit that could be picked up and moved.  This made it possible to audition different background colors:  orange, purple, pinks, lime and even...gasp...brown (shocking I know!!)
And while there were certainly some exciting color combinations, I chose to use the challenge black fabric as it allowed the blue waves pop!!  A friend was in need of more black fabric to complete the binding on her entry so I tried my best to conserve as much of the black fabric for her to use.  This was done by tracing the gaps onto freezer paper and adding some extra allowance.  Each template shape was then cut out and repositioned onto the challenge black making for a fun jigsaw puzzle as I tried to efficiently nestle all the shapes together and minimize any fabric waste.  Based on the image below of the remaining scraps, I think I was pretty successful as I was able to share a little over 5" x 18 or 20" with my friend to complete her binding!!  More Elmer's school glue was used to glue baste each background shape into place resulting in a finished quilt top.

I had envisioned some dense quilting, so I was confident that my glue basted edges would be reinforced in the quilting process.  Using flowing water as my inspiration, my doodles included different combinations of wavy lines, bubbles and spirals.

In my initial doodles, I used the strata lines as boundaries for each new shape.  But over time, I started to blur these boundaries, allowing some of the motifs to flow over into neighboring doodles, adding a water like feel.  A silver metallic thread was used for all the layered waves.
A variety of angular motifs provided a nice contrast to the swirling designs, as well as simulated the texture of a painter's canvas.
Black Aurifil in 50-weight was used to quilt the black background areas as I did not want these areas to draw focus from the brushstrokes.
One of the smaller strata sets was used for my quilt label.  A black micron pen was used on the lighter blue stratas, while a silver metallic Gelly Roll pen was used to write on the darker fabrics.
My Artist Statement:  In Starry Night, Vincent van Gogh’s iconic brushwork combines darkness with light, chaos and serenity with color and texture.  In my minimalistic, modern remake, multi-hued curved strata ebb and flow, mimicking the hundreds of colorful and textured paint strokes Vincent layered into his celestial backdrop.  Metallic threads add flowing textures that truly sparkles against the brilliant blues swirls that dance off the edge.
There were 465 submissions which is both amazing and daunting!!  Given both the sheer quantity as well as the impressive quality of this year's entries (many of which have been posted onto social media), the jurors are going to have a difficult time choosing which 120 will join the travelling exhibit.  Regardless of outcome for my entry, I know it will be a truly awesome exhibit and look forward to seeing it at PIQF in 2018!

"I often think that the night is more alive and more richly colored than the day." 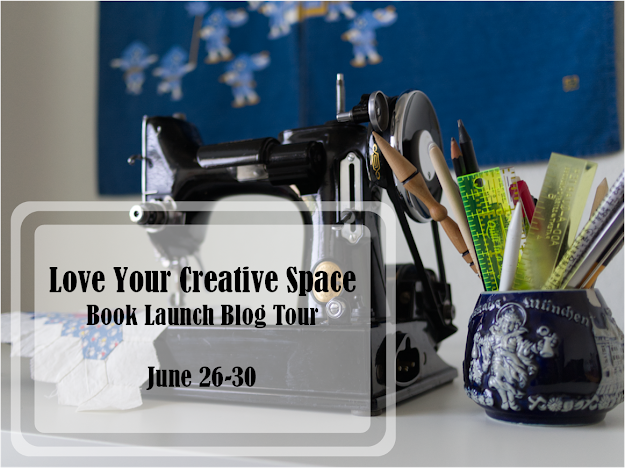